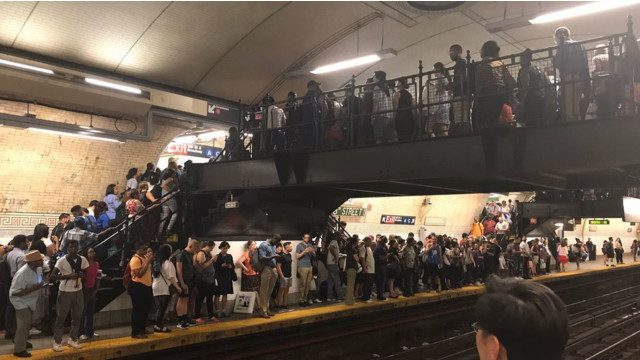 Trash on the southbound A train tracks caught fire at about 7:25 a.m., an FDNY spokeswoman said. The blaze shut down B and C lines and partially suspended A and D train service for more than two hours, according to the MTA. Service resumed with extensive delays at about 9:50 a.m.

“Disruptions to service are unacceptable — we will do a better job, and we’re working every single day to deliver on that promise,” MTA Chairman Joe Lhota said in a statement.

Emergency response crews worked to restore service “as soon as possible,” said MTA spokesman Kevin Ortiz. As firefighters worked at 145th Street, trains were held at nearby stations, Ortiz said, causing one southbound A train to be evacuated while it was stuck in the tunnel north of the 155th Street station.

The train was pulled up behind another already in the station. Riders were able to walk up and exit from the disabled train’s first car, which had access to the 155th Street station’s platform. One commuter from

he disabled train’s first car, which had access to the 155th Street station’s platform. One commuter from the stalled train posted a video of the exit on Twitter, showing riders calmly shuffling up to the front of the train.

The delays sent riders scrambling for alternative options to work, according to accounts on Twitter. Photos depicted large crowds at a nearby bus stop and in stations on the Seventh Avenue line. An image of riders packed onto the passenger bridges of the No. 1 train’s 168th Street station went viral.

The 181st Street station a bit farther uptown was crowded to the point where commuters struggled just to make it through the turnstiles, according to Matthew Hawkins, a Washington Heights-based writer who was trying to get to a job interview downtown.

“There were so many people trying to get into the elevators at the station. Eventually I was able to get in and get down to the platform, which was a madhouse — everyone is angry and disgruntled because they’re late,” said Hawkins, who had to wait for two No. 1 trains to pass before he could squeeze his way onto one.

“I gave myself an extra hour to get to my job interview and that extra hour ended up getting eaten up. Now I was late, and it doesn’t look good to be late to a job interview.”